All you need to know about Zakat, Sadaka and Fitra 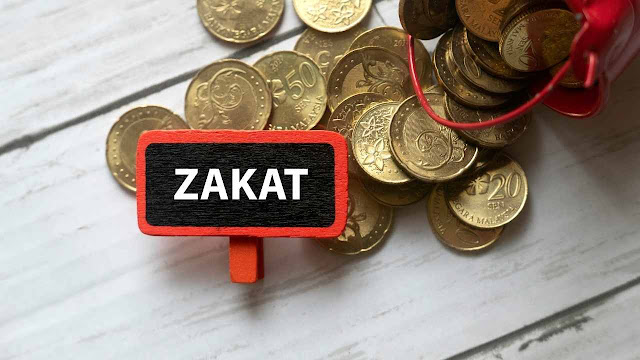 It is one fortieth i.e. 2.5% of the Gold, Silver or Cash, Fix Deposit, Shares, Provident Fund or Property / Business.

The one who rejects it is a Infidel (Kaafir) those who do not give Zakat are wrongdoers and worthy of punishment.

According to Shariat, Zakat is defined as from your goods to take one part for Allah which has been fixed by Shariat and to make a Muslim poor person the owner of it. 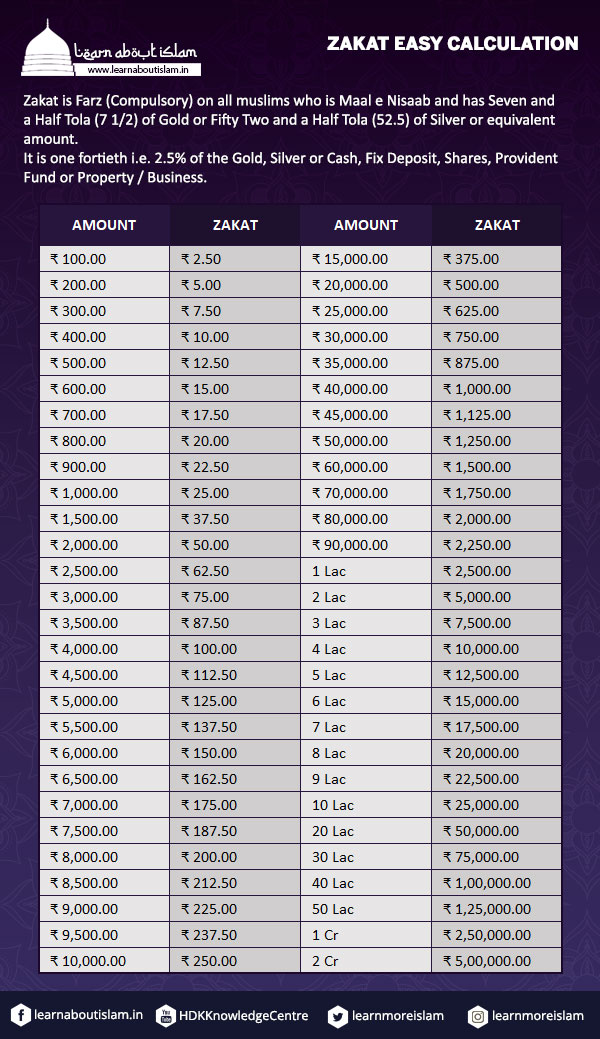 Conditions when Zakat would become necessary1. To be a Muslim 2. To be an adult 3. To be sane 4. To be free (i.e. not a slave) 5. To be the owner of goods above Nisaab (threshold-where Zakat would become necessary)6. To be a complete owner of the goods 7. To be free from any sort of loan 8. To be free from any goods which are regarded as basic necessities of living 9. The good have a value which will increase 10. For a year to pass How much Zakat should be given ?When you have enough gold or silver that goes above the Nisaab then one fortieth is given, i.e. 2.5%. Whether it be in it’s original form or in the form of coins or something has been made out of it (such as jewellery, utensils, watch etc.) then Zakat is necessary on it. For example if you have 88 grammes of gold then 2.25 grammes of Zakat is necessary or if you have 620 grammes of silver then 15.75 grammes of silver is necessary for Zakat [Durr-e-Mukhtar, Bahar e Shariat]Who can accept Zakat or Given Zakat: 1. Faqir – poor person 2. Misqueen – Beggar 3 Aamil (Designated Person) 3. Aamil (Designated Person) 4. Riqab – Slave 5. Gharim – Person in debt 6. Fee-Sabeelillah – Spent in the path of Allah 7. Abn-isabeel – Traveller It is better when giving Zakat, Sadaqa etc. that it should be given to your own brothers and sisters, then to their children, then to your paternal uncles and aunts and then to their children, then to your maternal uncles and aunts and then to their children and then to people living in your home village or town [Johra, Alamgiri etc.]. It is quoted in the Hadith Sharif that Allah Ta’ala does not accept those people’s Sadaqat whose relatives are in need of it and they give the money to others [Radd-ul-Mohtar]. 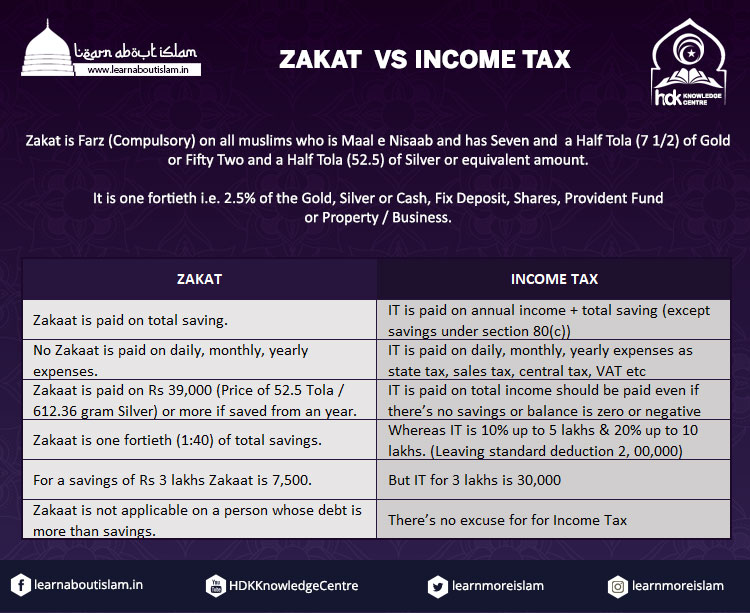 > Later in the year end we pay income tax on all our expenditure for which we paid the VAT, Sales tax,  Commercial tax, central tax, Luxury tax….

SADAQA AND FITRA The Holy Prophet Sallallaho Alaihi Wasallam has stated that ‘ a servant’s fast remains stuck between the earth and sky until he gives Sadaqa-e-Fitra [Delami, Khateeb, Ibn-e-AsaakarJ.Sadqah is wajib on a person who is maal-E-Nisaab and must give Sadqa-e-Fitr for himself and for his children, as long as the children are not the owner of Nisaab themselves and if they are then the Sadqa for them will have to be given from their goods. It is Wajib to give Sadqa of a mental child even when they reach adulthood upon the father as long as the child is not the owner of Nisaab themselves, and if they are the owner of Nisaab then the Sadqa will be given from their goods [Durr-e-Mukhtar, Radd-ul-Mohtar].Quantity of Sadqa-e-Fitr The quantity of Sadqa-e-Fitr is half a Sa’a of wheat or it’s flour or instead of this half a Sa’a of it’s mixture with barley, or one Sa’a of dates or raisins or barley or it’s flour or instead of this one Sa’a of it’s mixture [Hidaya, Durr-e-Mukhtar, Alamgiri etc.}. Rule: It is better to give the flour of wheat or barley rather than the grains and it is better than that to give the monetary value, whether you give the value of wheat, barley or dates. However, during a price war or famine it is better to give the goods than money. If money is given for bad wheat then subsidise the rest of the money with the money of good wheat [Radd-ul-Mohtar]. What is weight of a Sa ‘a After great study and analysis it is suggested that the price at present (however, this can increase) two pounds and fifty pence (£2.50) The price of half a Sa’a is one pound and twenty five pence (£1.25). One Sa’a is four pounds and six and a half ounces (4lb, 6.5ozl and half a Sa’a is two pounds and three and a quarter ounces (2lb 3 25 ozi For the sake of ease it is better to give four and a half pounds of (4 5lb) barley or dates or two and a quarter pounds (2.25lb) of wheat for each person as Sadqa-e-Fitr. Who should be given Sadqa-e-Fitr ? The same people qualify for giving Sadqa-e-Fitr as those who qualify for giving Zakat to except for an Aamil An Aamil can be given Zakat but not Sadqa-e-Fitr [Durr-e-Mukhtar, Radd-ul-Mohtar]. Important Points on Sadaqa-e-Fitr:1. Sadaqa-e-Fitr is Wajib upon such a person who owns assets, which equal the value of the Nisab. Such individuals should give Sadaqa-e-Fitr on their behalf and on behalf of their children, if they do not own assets equal to the value of Nisab. Yes, however, if the children do own assets which are equal to or more than the Nisab limit, then the Sadaqa-e-Fitr shall be given from their own wealth. [al-Durr al-Mukhtar, Bahar-e-Shari’at]

2. The owner of Nisab in the ruling as regards Sadaqa-e-Fitr is such a person who has 7 ½ Tola gold (93 grammes 312 milligrammes,) or 52 ½ Tola silver (653 grammes 184 milligrammes), or their equivalent value in money or any other form of asset.  Or, one owns business or non-business stock equivalent to that value, and these goods are additional to the basic necessities of living (Hajat-e-Asliyyah).

3. For the Sadaqa-e-Fitr to become Wajib it is not necessary that one has fasted. Therefore, if anyone did not fast due to any excuse valid in the eyes of the Islamic Law; such as one is a musafir (travelling to a destination which is at a distance of approximately 57 ½ miles or 92 kilometres), or is ill such that his illness shall become worse if he fasts, or because of weakness caused by old age, or – Allah forbid! – one did not keep the fasts due to any non-valid reason, then the Sadaqa-e-Fitr is still Wajib upon the person. [Radd al-Muhtar – Vol. 2 Page 76 and Bahar-e-Shari’at]

5. If one wants to give anything besides wheat, barley, dates or raisins; for example, rice, millet or any other linseed, then the price of 1 sa’ of wheat or ½ sa’ of barley should be taken into consideration.

7. It is Mustahab (act of great reward) to give the Sadaqa-e-Fitr on the morning of Eid day (after the beginning time for Fajr), before going to the Eidgah to perform the Eid prayer. [Fatawa-e-‘Alamgiri – Vol. 1, Page 180]

8. It is permissible to give Sadaqa-e-Fitr prior to the month of Ramadan or in Ramadan before the day of Eid. [Fatawa-e-‘Alamgiri – Vol. 1 Page 179 and al-Durr al-Mukhtar]Hadiths on Sadaqa-e-Fitr:I. Hadrat ibn ‘Umar said, “The Prophet made incumbent on every male or female, free man or slave, young or old, the payment of one Sa’ of dates or barley as Sadaqat-ul-Fitr. The Messenger of Allah commanded that this sadaqah be paid before one goes to perform the Eid prayer.” [Sahih Bukhari – Book on Zakah, Volume 1, Page 204]II. Hadrat Hasan said: Hadrat Ibn Abbas preached the people towards the end of Ramadan, standing on the pulpit (in the masjid) of al-Basrah. He said: “Bring forth the sadaqah relating to your fast.” The people, as it were, could not understand. “Which of the people of Medina are present here? Stand for your brethren, and teach them, for they do not know” said Hadrat ibn ‘Abbas. He further added: “The Messenger of Allah prescribed this sadaqah as one sa’ of dried dates or barley, or half a sa’ of wheat payable by every freeman or slave, male or female, young or old.” When Hadrat Ali came (to Basrah), he found that the price had come down. He said: “Allah has given prosperity to you, so give one sa’ of everything (as sadaqah).” [Sunan Abi Dawood – Book on Zakah, Volume 1, page 229]

III. Hadrat ‘Abdullah ibn Tha’laba or Tha’laba ibn ‘Abdullah (narrator cannot recall exactly what the name was) ibn Abu Saghir, who narrates from his father that the Messenger of Allah said, “One sa’ of wheat is enough from every two; young or old; freeman or slave; male or female. Those of you who are rich will be purified by Allah, and those of you who are poor will have more than they gave returned by Him to them.” [Sunan Abi Dawood – Book on Zakah, Volume 1, Page 228]IV. Hadrat ‘Abdullah ibn ‘Abbas reported that the Messenger of Allah prescribed Sadqatul Fitr, so that the fasts (kept throughout the month of Ramadan) may be purified from any falsehood, wrongdoing or evil talk, and (at the same time) it shall assist to feed the poor and the needy. [Sunan Abi Dawood – Book on Zakah, Volume 1, Page 227]

V. Hadrat ‘Amr ibn Shu’aib reports from his father, who reports from his grandfather that the Holy Prophet sent a person that he calls out loud in the streets of Makkah al-Mukarramah that Sadaqat ul Fitr is Wajib (necessary) upon every muslim male or female; freeman or a slave; young or old. [Sunan Tirmidhi – Book on Zakah, Volume 1, Page 146]

WHAT DOES QURAN SAY ABOUT ZAKAT:

Give the news of bitter very torment to those who save their property and money, and do not give their Zakaat to the poor amongst Muslims (9:34)


HADITH SHARIF: “Protect your property against harm by paying Zakaat.”